Full disclosure:  I am one or both of the following two things. I am cheap.  I am a late adopter.

I am just now upgrading from Quickbooks 5.0 to Quickbooks Pro 2008.  I have had Quickbooks 5.0 since I started my first business circa 1996 (and yes, it was an online business).  I haven't really had a need to upgrade until I purchased my last Dell laptop with Windows Vista.  If it ain't broke and I'm cash poor, don't fix it.  I'm also fond of being a late adopter.  A late adopter is defined as somebody who is slow to embrace a new product, technology, or idea.  I disagree with "or idea" part of that, but if it's a product or technology, I would much rather wait until something is proven before I adopt it.

Well,  being a late adopter has given me extra insight into the differences between QB 5.0 and QB 2008.  Check out the differences just in disk space alone (below).  If this isn't progress, I don't know what is.  That's a 2600% increase in file size and a 3500% increase in number of files.  Almost makes me think Intuit has conspired with the PC hardware manufacturers. 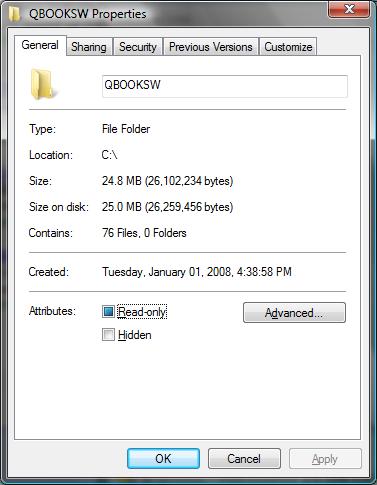